(Cricinfo) David Warner’s absence from the Sunrisers Hyderabad XI made no change to the team’s performance on the field, as they lost to Rajasthan Royals by 55 runs, staying at the bottom of the IPL 2021 points table yesterday.

The Sunrisers’ sixth loss in seven games was set up by Jos Buttler’s maiden T20 century, who pumped 11 fours and eight sixes in his 64-ball 124. That helped Rajasthan Royals post 220 for 3, with Buttler hitting his last 74 runs from only 25 balls after getting to fifty in 39 deliveries. 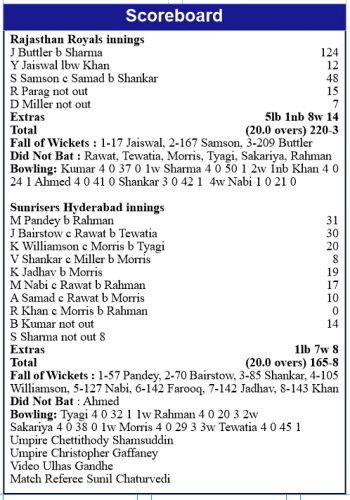 It was the first time in Warner’s career that he was dropped by the Sunrisers. His previous 20 missed games for the franchise were either due to a ban (17 games for the Newlands ball-tampering scandal) or because of international commitments (3 games while representing Australia).

Kane Williamson’s three changes in the XI – Abdul Samad, Bhuvneshwar Kumar and Mohammad Nabi – strengthened the side’s middle order, but after a top-order collapse ruined a solid start, the Sunrisers could simply not recover as the Royals bowlers relied on their cutters and slower balls to keep the opposition down to 165 for 8.

It was the first time in a 20-over IPL game that Rashid Khan bowled as early as the third over of a match. It wasn’t a pretty start though as Yashasvi Jaiswal hit him for three fours, two off the bat and one off the pad. But after burning a review earlier in the over trying to dismiss Jaiswal lbw via the DRS, Khan struck off the final delivery of his first over when he got a quicker ball to fizz through and hit the batter’s pads in front of middle.

In his next over, Khan appealed for lbw to dismiss Buttler – when he was on 7 – after he missed a reverse sweep, but the umpire was not convinced. Having used their review in the previous over, the Sunrisers were left to rue their poor use of technology as replays showed Buttler would’ve been out. Khan finished with 1 for 24, as Williamson chose a different plan for him. Khan usually bowls in the middle overs of the game, but his four on this occasion ended by the 11th over as the Sunrisers looked to break the dangerous Buttler-Samson stand. That didn’t happen, and by the end of his spell, the Royals were 86 for 1 with the Sunrisers’ X-factor seen off.

A new landmark for Butler

Having surviving on 7, Buttler flicked two fours off Kumar to end the Powerplay after which he short-armed a pull off Vijay Shankar. But the boundaries from his bat then dried up briefly as he laboured to 35 off 33 balls.

But thereafter, he changed momentum by cutting Khaleel Ahmed for four and then depositing Sandeep Sharma for a six and four to reach his fifty.

After that, he hit three sixes and two fours in the space of 1.2 overs, including a 21-run 15th over from Nabi. Fours off Kumar and Shankar then brought him to 99 from 55 balls, before a single to end the 16th over brought up his century. With three sixes and a four off the 19th by Sharma, he got to 124 before dragging a shot onto his stumps.

There were other useful contributions for the Royals. Samson contributed 48 in a 150-run second-wicket stand that lasted 13.4 overs while Riyan Paran (15) and David Miller (8) dropped by with quick cameos.

In what was only his second time in IPL opening the batting, Manish Pandey thumped Kartik Tyagi and Chris Morris for two fours and two sixes after surviving a tricky opening few overs where he looked uncomfortable against the short, and moving deliveries. But he was out bowled by a slower ball from Mustafizur Rahman for a 20-ball 31.

Jonny Bairstow led the early charge by smacking Chetan Sakariya for a six and two fours off the bowler’s first three balls of the match but could not capitalise on the early momentum when he was caught at long-on by a slower delivery from legspinner Rahul Tewatia for a 21-ball 30. From 57 for no loss after six overs, the Sunrisers swiftly went to 70 for 2 after eight.

With the momentum back with the Royals after the two wickets, Sakariya and Tewatia bowled two quiet overs to Williamson and Shankar. Morris then had a chance dropped in the 11th an overhead catch at midwicket but made up for it next ball when an offcutter was mistimed by Shankar to long-on for eight.

Two overs later, another slower ball got a wicket, this time to Tyagi, whose short ball to Williamson was clubbed to the fielder in the deep for a 21-ball 20.

Nabi then entertained with two massive sixes off Tewatia to race to 17 off four balls, but fell to an offcutter from Mustafizur, having sliced one to extra cover. With Nabi’s wicket, the Sunrisers needed another 94 off 34 balls with only two recognised batters remaining.

Too much for Samad, Jadhav

Kedar Jadhav had begun his innings with a six off Tewatia, but struggled with timing generally.

Samad suffered the same fate as he kept finding fielders after hitting a six early on. Sakariya, Mustafizur and Morris used their change of pace on a deteriorating surface to force the batters to manufacture power.

Morris then took out Samad after a spectacular running catch from IPL debutant Anuj Rawat. In the same over, Morris dislodged Jadhav’s stumps with a straight ball. After 142 for 7 after 17 overs, the Sunrisers were left trying to protect the net run-rate. They finished on 165 for 8.