When rain forced a premature end to yesterday’s penultimate day, the tourists were in a commanding position on 217 for one with the right-handed Crawley unbeaten on 117 and partnered by captain Joe Root on a typically compact 84.

The pair came together in the first session after marquee seamer Kemar Roach hit debutant left-hander Alex Lees in front for the second time in the game, and have so far put on 193 runs for the second wicket to deflate West Indies on a placid surface.

Crawley, who crafted a masterful 267 against Pakistan nearly two years ago, has so far punched 16 fours from 200 deliveries while Root chalked up his 54th Test half-century to continue his imperious march towards 10 000 runs in the longest format.

With a lead of 153 runs overall, England now hold the upper hand and are likely to chase quick runs early today, set a difficult target and then put West Indies suspect batting under scrutiny.

West Indies batting coach Monty Desai was unfazed by the challenge ahead.

“Pretty much my message to them (batsmen) will be [to apply themselves]. We have done this before … we have been in this situation before,” He said in a post-match interview.

“Test match [cricket] is all about 15 [sessions], five days of game so even though you’re in the field, when you come back again in the fourth innings, you want to show  that character.

“You want to show that you have that ability to bat again in the last innings.”

The day belonged to England, left-arm spinner Jack Leach (2-79) knocking over Jayden Seales without scoring with the third ball of the morning to end West Indies’ first innings on 375, the hosts adding only two to their overnight total.

Trailing by 64 runs, England suffered an early blow when Lees played around one that nipped back from Roach and was lbw for six with 24 runs on the board, his futile resort to DRS smacking more of desperation than confidence.

However, that proved the last taste of success for the home side as Crawley and Root cashed in on the benign surface to haul their side out of danger.

Given out lbw to Roach in the first over before he had scored but reprieved by DRS, Crawley regained his composure to be 45 not out at lunch with England on 72 for one, and raised his half-century three-quarters of an hour after the interval inclusive of an 11-minute break for rain.

Let off on 71 in the third over before tea after television replays proved inconclusive over an appeal for a catch at slip off left-arm spinner Veerasammy Permaul, the 24-year-old Crawley reached the interval on 79 with England on 146 for one, before raising triple figures nearly three-quarters of an hour into the final session.

Almost unnoticed at the other end, Root went about his business with typical adroitness to be 20 not out at lunch, 55 at tea, and on the cusp of his 24th Test hundred at the end. 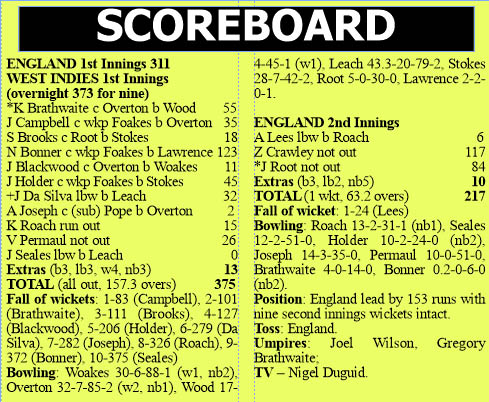